Well it is almost impossible to believe that it is November!!! Today has been like summer and Colin and I braved the Atlantic waves which was an exhilarating but very cold experience . We were the only ones in the sea – maybe the Irish have more sense!! 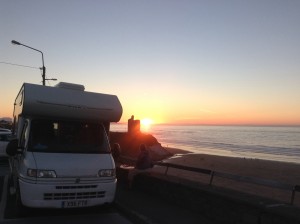 So the last blog left us sitting having a Guiness in Killarney. We slept well after a fab meal of roast lamb next to the fire. The next morning we set off (with me driving!! Colin was very quiet 😜) through the mountains around Killarney with the aim of heading to the most south westerly point of Ireland – Baltimore and Skibereen – for Colin to revisit the site of a student field trip experience on Sherkin Isle many years ago. The drive took us over the pass at Ladies View before running down into Kenmare and then on to Bantry. 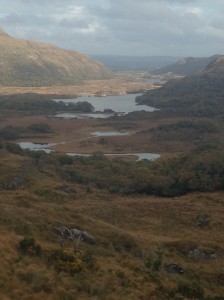 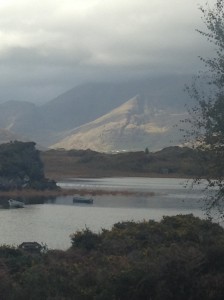 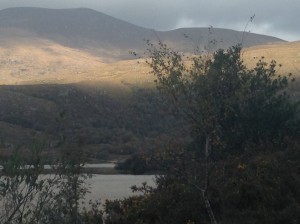 We decided to stop off at Loch Hyne for the night. Thus was again a place Colin recalled as a marine biologists dream with an almost land locked sea Lough with a narrow and shallow entrance. He had stopped here on the way to Sherkin Isle 35 years ago. We camped up a layby on the side of the Lough to have lunch. Colin had a football chat with a local wearing a Liverpool tracksuit who said in answer to Colin’s query about seaweed on the wrong side of the layby that he had been trapped by the tide but that we had nothing to fear. We then went off for separate cycle rides as I was demanding some space – I got back to the camper first and as I was making a cup of tea noticed that the tide was starting to creep through the sea wall – an English couple said ‘no need to worry- high tide is at 4.10….. However the tide continued to come in now over the sea wall at which point there was a frantic knocking on the door . The same man saying ‘sorry I was wrong it is obviously a freak high tide and we are off! Suggest you move now!’ 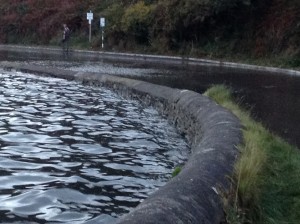 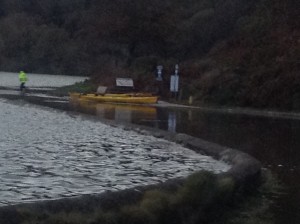 He had a Land Rover and I decided it was too risky to drive the van through the rising water so pulled the other way up a slight incline off onto a grassy verge. I sat there and watched the water rise higher and higher, it got dark and I was surrounded by water with a real fear that it would start to come in the van. 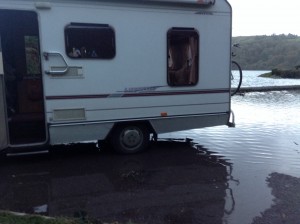 I decided at that point to start praying and was also starting to wonder if God was using the tides to show me how powerless I really am and that it really is time to stop trusting in my own strength…..

Even the locals (there were 2 men swimming in the loch at the time) were exclaiming loudly about the phenomenon of the tide seemingly continuing to rise well after it should have stopped!

At this point a wet figure appeared at the window – Colin had managed to push his way with his bike through waist high water to get back to the van . I was very pleased to see him (understatement) – these things are much less scary with 2 of you. It turned out Colin had cycled to Baltimore and whilst chatting to locals drinking Guinness watching kids play in the water lapping over the top of the harbour. The locals were bemused at the height of the tide and Colin had idly wondered if the camper would be alright (note to Colin – try to spot when the Holy Spirit is talking!)

Anyway with Colin settling Kathy we cooked up some bangers and mash and the water started to recede. Once the ground was dry enough we drove off quickly in the dark to avoid any further crises. We arrived at a pub in Baltimore and they agreed we could spend the night in the car park. Slept well and awoke to find we were camped opposite yet again another lovely view overlooking Baltimore Harbour and the sun was shining.

Colin now wanted a day to visit Sherkin Isle to get closure on an incident from 35yrs ago. He took the ferry to the island talking with a guy who was moving there with his artist wife – both teachers. Once on the island he set off and found the pub now called the Jolly Roger. It looked exactly the same inside as it did 35 years ago! He decided to trek to the end of the road and the walk around the coast via beaches and cliffs which proved to be a mistake. 2 hours later after risking being barged over the cliff by a bull, having to go in and out of a multitude of tiny coves and fighting his way through 100m of 4ft brambles he got back to the pub. Next stop was retracing his steps to where he lost part of his right ear on a dry stone wall during his one and only adult fight. A few tears and prayers later and the closure was achieved. It’s funny how these things stay with us for years. 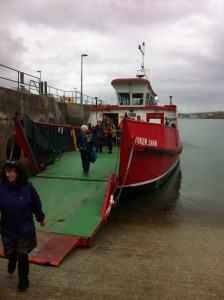 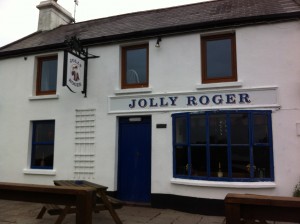 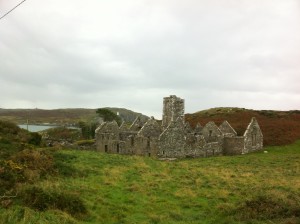 That evening we decided to drive north inland past Skibereen on to Drimoleague and a campsite Cyril and Gabrielle had told us about called Top of The Rock. It was up a very narrow steep muddy track that the Passion Wagon aka Boadicea (Bo for short) managed with some coaxing. There the owner David greeted us so warmly and we had the luxury of hot showers, laundry and electric hook up. David is farmer, campsite owner and pastor. It’s a lovely location with pods to live in (wooden tents that look like upside brown boats) animals to feed, views across hills and a centre for walking several paths such as the 37km St Finbar’s way which Kathy did a little of ending at Castle Drimoleague. 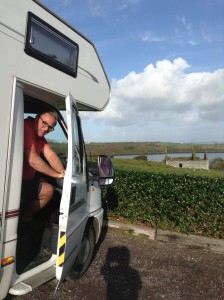 Next day Friday we drove back to Kilmalloch to see Maggie and the Hanleys. On the way we stopped off at the local AA meeting at Brough. No not because we’d got concerned over our Guinness consumption but because we realise alcohol has caused so much damage in Ireland and we thought we ought to investigate how this organisation works. It was a very honest and moving evening.

On Saturday we cooked everyone an Irish breakfast the watched our nephew Tadgh play soccer (football is Gaelic Football here) for his local team. He did well despite the team losing to some local rivals and we decided a cooked breakfast may not have been the best preparation for running around a soccer field. We then said our goodbyes and drove to Ballybunion via Newcastle West. After negotiating the Halloween celebrations in the village centre we got to Faha where Tom gave us a warm welcome and a lovely meal.

On Sunday Tom drove us to Listowell Church for their 11-1 service followed by soup and sandwiches. What a lovely open and honest congregation they are. People there are seeking God earnestly. The afternoon was spent swimming, yes swimming on the 1st November, as the weather was blue cloudless skies and warm sun. In the evening we welcomed Cyril and Gabrielle back from their journeys and meetings across the breadth of Ireland. It was a good evening followed by a Monday prayer time where God did some significant work. Tom’s home is a place where God does business.

So an eventful week! God did some deep work this week. Rising Tides in deed. Praise Him!n