Well actually it’s mostly a trip to London! Our first cooked breakfast as we were largely on our first day off. I will have to stay away from these if that weights going to come off but the odd one is OK isn’t it? Kathy spent the morning in prayer ministry with a guest which bore fruit. This place is such a place of peace and tranquillity but with the Lord acting through our prayers and love for the guests little would be achieved. We shot off at 12:30 to get to London to see the Royal Marines Beating the Retreat for Prince Philip at Horseguard Parade. A 3 hour journey out of Wales to Hounslow West tube station on the Picadilly Line (I decided my confusion expecting the map to show it as yellow was due to me thinking of it as the Picallili Line) and an hour journey to Westminster via the District Line. We picked up our tickets then met up with Sam to watch the parade as part of the Royal Guard. A powerful display of precision and music with the band of the Royal Marines. Hard to spot Ben but we now know as we met him after that he was three from the back in the first group. My favourite bits were the Dreadnought and Lord of the Rings music plus of course the Marines showing off their skills in marching and handling their guns. There were poignant visual and music commemorating the Battle of Jutland. So sad and so dreadful war at sea.

Afterwards we had the best Steak and Ale pie ever at The Red Lion on Parliament Street. Then another 4 hour journey back to Nicholaston House arriving at 1:30. Kathy had to be up at 7 to serve breakfast but I was only needed at 9 to go in the office 🙂 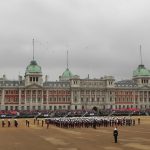 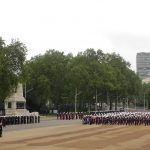 This entry was posted in Ben, Colin, Kathy, Sam. Bookmark the permalink.