Well we’ve been here for over a week and a half. Time is flying. Colin has spent days in the office answering a myriad of phone calls emails and answer phone messages. This place is fairly busy but it’s the variety of events and retreats on offer that cause most of the work in the office. And that’s ignoring the general overheads maintenance. Kathy continues to bounce (in the nicest way) between prayer ministry, weeding the garden, waitressing and washing up. 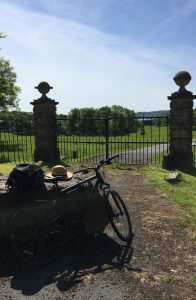 It’s been a fairly aerobic week too. On Saturday I did a 20 mile cycle around the south of Gower. Starting from the House I cycled past the Penrice Castle grounds including stopping off at the King Arthur pub in Renoyldston and the Kings Head in Llangennith. There are some exceptional real ales brewed on and around the Gower. I ended up pushing my bicycle over the dunes onto Rhosilli Beach and then cycling along this wonderfully flat long sandy shore. Pushing the bike up the path at the end was a bit of a chore though. 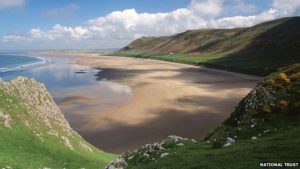 After Rhosilli I cycled past but not down to Port Eynon, Oxwich and Horton then made a disastrous decision to go through Penrice. Quaint though it was I should have been warned by the exciting fast downhill to a stream. The road up was hard!

The final cycle back to Nicholaston house was dodgy on the roads as the traffic was thick and fast though I must admit drivers were very careful when passing by. Thank you drivers n the Gower.

Tonight I have just walked out the back along Cefn Bryn on the Gower Way. I intended to just pray and take some photos but the vista was so amazing. You can see Burry Estuary, Oxwich Bay, Swansea, across the Bristol Channel to Exmoor and the East to the Brecon Beacons. 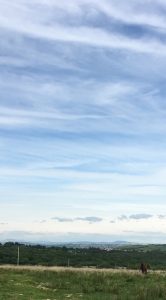 You can view Brecon from the Gower

I kept walking to higher ground and in the end decided to go all the way to Renyoldston village to have a pint of Gower Gold at The King Arthur pub. 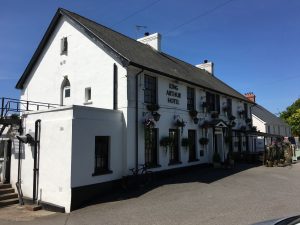 They have Excalibur on the wall they say. Hmmmm! Cleverly I decided to text Kathy asking her to come and join me for a drink. As I sat there downing my pint and a naughty bag of crisps and dry roasted nuts (I WILL be self-controlled with snacks, I WILL be self-controlled with snacks) people who were dining outside started streaming in as swarms of midges descended as the sun was setting. Apparently it was really unusual but be warned. The menu by the way looks excellent as does the food itself. And the prices were very fair I thought. 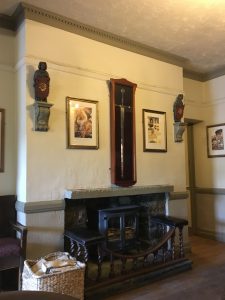 Is this really Excalibur … 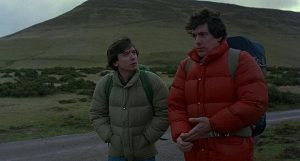 Anyway to cut a long story short Kathy didn’t reply to the texts and so at 9:45pm I had to strike back out on the Gower Way. As I hit the path I was reminded of that scene in American Werewolf in London as the guys leave the Slaughtered Lamb and cross the moors. Just as I thought that I heard a wolf (dog) howl. I began to wish I’d brought Excalibur with me. Anyway the headphones went on and I started singing along at the top of my voice to Noel Richards ‘There is power in the name of Jesus’ and ‘He is our Fortress.’ As darkness descended the sight of me with an iPhone torch on my own singing loudly was probably enough to scare off all but the hardiest demons! (and werewolves). Exhausted I got back to the camper-van at close to 11pm and a dozing Kathy who was suitably chagrined as she’d ignored my texts. Needless to say I slept well. In fact I slept in so was late to help the wonderful Anita and Pam with breakfast. They were very forgiving. They do what it says on the tin 😉
This entry was posted in Colin, Kathy. Bookmark the permalink.