Well I can’t believe it’s been a whole week since I put anything on the blog!!

Last weekend went in a blur – we met the men from Kings at Shannon airport at 10pm and had a quick cup of tea before bed . We parked the camper outside Mungret College where a small group of people have been working incredibly hard to rebuild part of Gods Kingdom on the edge of Limerick. The building is massive and looks a bit like Colditz! – however they have created a church in the lovely chapel, a Christian school , a Bible college, an art gallery and a cafe. A real sense of excitement and growth. The men gathered on the Saturday with about 30 men from the West of Ireland.

The evening and sun lunchtime unsurprisingly for Ireland were dominated by the rugby (Ireland seems to have an endless capacity for sport😜) it was a sad experience to have sun lunch in the pub whilst watching Argentina beat the valiant 14 man Irish squad. The defeat was met with a quiet but gracious response. I in particular at the end of the weekend was feeling pretty disconnected and very unsure about what on earth we were doing in Ireland …..
After saying goodbye to the Kings men we then followed Cyril and Gabrielle down the Shannon estuary to Ballybunion and Toms house on the cliffs a small farming community called Faha. Tom is a delightful man from the area who has recently returned after 23 years in Liverpool working as a psychologist. He is just starting psychotherapy training and is gifted not just with years of experience of working with human beings but an uncanny insight and gift of dreams that were to be very significant for us over the few days. 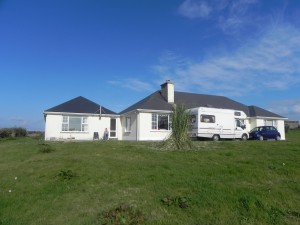 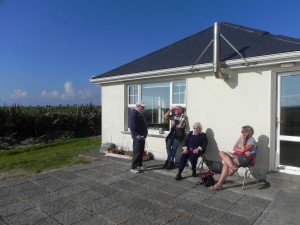 Our time was spent talking and praying cooking eating and meeting various friends from the area. We had a fantastic walk along Ballybunion beach between 2 weather fronts with massive black clouds either side of us but with a sense of an ‘open heaven ‘ with blue sky and sunshine over where we were walking and a huge gorgeous rainbow stretching over the sky and appearing to end over Faha.

One of the most exciting activities was helping to replant the hedge that surrounds the house – it had recently been trimmed and there were numerous ‘breaches’ in the ‘wall’. We sought to link relevant scriptures as a way of ‘planting’ Gods Word in the land. This was particularly exciting for me as it was a teaching that Flame are particularly passionate about and they have many stories of how places have been spiritually restored following healing the land. 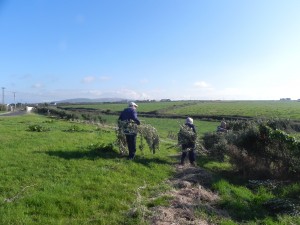 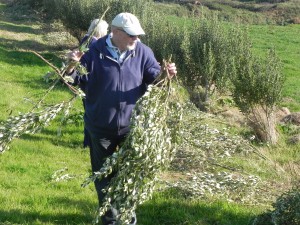 So somewhat sadly after a time of rich fellowship we ‘stowed ship’ and set off for the unknown (possibly Dingle) with renewed hope and certainty that Agod knows what he is doing in a time of real uncertainity for all of us.

We drove down the Wild Atlantic Way heading towards Dingle. On the way we stopped at Ballyheigue, a place we had been before 20 years ago with Kathy’s family and the Hanleys. Colin recalled kayaking out to a large ominous black rock and kayaking with Bob Kathy’d dad among dolphins. We found views of the rock in a stormy sea and decided to stop at a snug watering hole called Tides Cafe, opposite the run by a delightful lady called Chris. We recommend you stop and try her breakfast.