Nicholaston House – The end of June 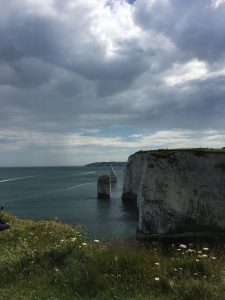 at Nicholaston House. The last two weeks have flown by. Two weekend ago we had the privilege of being hospitable to a group of 30 or so Eritrean and Ethiopian refugees displaced from their home because of the troubles in those countries. The house was awash with the sound of laughter as several of the group were under 10. Swansea and Cardiff are well known as cities of sanctuary for refugees. I had time to speak with a few of the adults. Many of these are professional people who are struggling to get jobs matching their education but in humility they are accepting any roles to support their families. Some of their singing though rhythmic ,as you’d expect for Africans, sounded sad and solemn.
More recently we have hosted a week called ‘Discovering Your God Given Song’ with Cath & Dai Woolridge plus the ‘Sound Of Wales’. These talented and passionate people filled the house with worship music spoken word dramatic sets and encouraged the participants to deepen their understanding of the love of God towards them using music and song to create an atmosphere that moved from one of awe to beauty and spirit filled. The team leading the week and the visitors greatly appreciated the lovely setting and hospitality for this musical pursuing of God. On the Thursday there was a concert attended by over 70 visitors.

We’ve also had visitors from King’s or should I say Pakistan and Burundi. Jean Brand who is on furlough, staying at our house in Lordswood, from teaching counselling skills in Ralwapindi and Rachel Carpenter on furlough from all the tensions in Bujumbura. I trust they found the house restful and helpful. 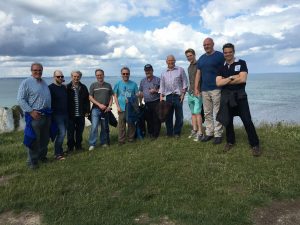 Simon is a strong 187 but seriously that perspective is a joke!

This last weekend I left Kathy behind suffering from a bad cough as I travelled back to Southampton to go to the King’s Men’s Weekend at the Greenhouse Christian Centre (formerly Green Pastures). My journey home was one of the best times ever with God as I played tracks and sang along to One Hundred Hours, Matt Redman and Keith Green. God did some serious work in me on that journey which followed on from Prayer Ministry I’d received at the hands of my beautiful wife. Several ideas and words for the weekend came through too. We had a great time of fellowship, walking, talking, worship, swimming, listening to talks, Holy Spirit prayer times and of course a couple of pub visits. The walk to Old Harry and his wife at Studland was a breath of fresh air with sunshine between a couple of showers. We had some photos taken by a very obliging American lady. 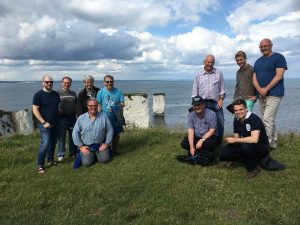 Some of the guys parting the way to see Old Harry

Though down on numbers from the last two years I believe the depth of fellowship and fun factors increased. Simon Orton our pastor led the talks on ‘Fight the Good Fight’ using Job, Daniel and Revelation. The content was superb and the question time and prayer sessions that followed were thought-provoking and encouraging. Also the meal time activity of guys sharing 3 stories about themselves only one of which had to be totally true was revealing, relationship building and quite hilarious at times. I came away for the first time feeling like I had developed my love for the guys as well deepened my love for God. The fact I’d been harbouring the same bug as Kathy all weekend didn’t matter.
However, the bug is still with me and Kathy and on returning to Nicholaston House I have found out that dear Anne and lovely Becky had both succumbed to the bug. Becky so badly she lost her voice. And what a voice to lose! She sings so beautifully. Hopefully we are all now on the mend and Pam, she of the lyrical Welsh voice, is thankfully back after 10 days leave. This place isn’t the same without Pam.

Dave and I supping Old Speckled Hen at Branscombe Chine

I ought to mention Europe I guess. Both the EU referendum and the football Euros 2016. I’d also voted back in Southampton. I had three votes as I was proxy for Ben and Kathy. Personally I voted out as I believe God wants the UK to be a sovereign nation again not tied into political and economic union with the EU which is a self-proclaimed godless institution. I also don’t like the fact that Europe passes laws we have little if any say in. I believe in democracy as the best way for the world to function if you are not looking to God and the EU is not democratic. Yes we will lose out on some freedoms and may suffer some hardship but we can, as individuals and churches, have more say in the way our country is run. What we need now is to pray Christian believers into parliament. Regarding the Euros, I have really enjoyed supporting Hungary (have I said we have 2 passionate Hungarian staff here in Anita and Gary?) and the smaller home nations but don’t want to say anything about England. It’s just too embarrassing. All I can say now is “C’mon Wales!”

The weather has been mixed. Several rainstorms and the odd thunderstorm. We have just had a very windy day but as the sun sets the calm arrives and I can see salmon pink tinted clouds lined up along the sky as I look across the now calm Bristol Channel. What a beautiful place this is.

We are now into a Prayer ministry week where the house has three people who have come to receive from God through sessions where they can talk and be listened to sensitively and then prayed for by a pair of prayer ministers. Kathy and I have joined that team. Again it was a privilege to be used by God to serve others. And He does provide. I can say without hesitation that the times in my life when I have received extended times of prayer ministry have been some of the most important times of my Christian walk. God does speak and heal our souls. He is in the business of making us whole, redeeming us and restoring us to be closer to who we were meant to be. Praise God that Jesus has broken the power of sin and death. That our past does not have to define our present not our future. Hope is found through faith in the love of Christ who is in us, the hope of glory!

This entry was posted in Colin, Kathy. Bookmark the permalink.