Well it appears that over 3 weeks have gone by. Time is really passing quickly. We went to our first church service last Sunday. Liberty Church part of Cornerstone meets in the Welsh Bible College at Blackpill between the Gower and Swansea. They meet in an indistinguishable long hut like building with an angle roof so the projection screen is at 60 degrees. We arrived as the singing started squeezing into the last two seats on the side and the worship was simply joyous. There were faces from several continents and ages from babies to octogenarian yet most were loud and bouncing. How some kept up their joyful bouncing for so long I don’t know. As I (Colin) joined in I scanned the room and several times choked up as I saw true worshippers so immersed in praising God yet others were aware of the need of those to be handed tissues as God touched them.
It was an unusual service and didn’t follow the plan we were told later. Impromptu sharing and moving testimonies led the way no doubt because the Holy Spirit wanted to have things His way.

We heard from a volunteer serving on a YWAM ship moored off Lesbos in Greece catering for the thousands of refugees now incarcerated in the camp. Men rioting for food and trouble between cultures ing to the fear and hopelessness of the abandoned women and children whose stories break your heart. Will BREXIT hinder this work as the love and gospel of Christ moves among these people groups many who have been told by their religious leaders to stay away from the Christians tales of ʿĪsā ibn Maryām. When a hurting, fearful and hopeless Muslim hears the truth the joy is tangible so I am told.

We also listened to a visitor from Nazareth. A deeply voiced lady who has worked to bring Arab and Jewish believing leaders together in the city where Jesus was not accepted in his day. The Arab Christians were convicted of their previous rejection of the Jewish believers and washed their feet.

All in all an amazing service.

Kathy and I visited Caswell Bay and did some walking towards Langland on a concreted path around the cliff tops. The views are lovely being able to see across the channel. Kathy managed to get some body surfing in as well. I recalled that the last time I was on that beach I was a student in Swansea and we helped with a young child who went into a fit when hit be a cricket ball his dad had struck. I recalled the exact spot as we walked past it. 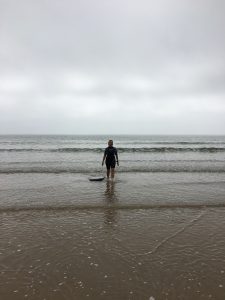 Beauty walks out the waves!

God does seem to be drawing out several threads from my past and I am getting more and more reassurance I am in the place he wants me to be at this time, despite some struggles with me being not quite sure where I fit in the work here. Kathy, on the other hand, as is her norm has struck up strong relationships already and God has used her to help others in many varied situations. I was thinking there would be more opportunity for discussions on faith and encouragements regarding bible study but the dominant work of service can be quite exhausting. I do manage to get some time reading but little time in brother to brother discussion and prayer. The workers here have churches and home groups where I guess they get much of their inspiration and recharging. As a couple we do encourage one another and actually Kathy has really helped me reflect on things and look to apply what God is teaching me. Thank you God for a believing and caring wife.

This entry was posted in Colin, Kathy. Bookmark the permalink.